You are here: Home / articles / Cricket Books and Writers

In this digital world of Facebook, video grabs, click bait and smart phone fixation, a question – why would we continue to write and read cricket books?     Is there an audience out there with a commitment and concentration span deep enough to attempt to absorb 70,000 or 80,000 words rather than 140 characters of a tweet? Someone prepared to dispense with their smart phone cuddly toy for just a nanosecond to test the prospect of being transported into the written word of a cracking cricket yarn?

But – caution – authors beware. Your carefully crafted dispatch will likely be juggled with the book propped up with one hand, the smart phone in the other and probably Netflix screening out of the corner of one eye.

I know this juggling is doable. In my days of running radio stations and their accompanying news dependence, I found it was possible at home time to simultaneously: watch television, listen to the radio, read a newspaper and adroitly answer questions and engage in conversation with my spouse. Confession – Mary   is a loving and tolerant wife.

None of this is to say that purist readers won’t practice what they always have –   and I certainly count myself in this category – find a preferred reclining pose – in bed, on the couch, under a sun umbrella by the pool – and submit to the enticing magnetism of their favourite author.

What is hard to dispute is that sales of cricket books, in millennial parlance, is trending. Two recent examples give an indication of market response. The ‘get it oﬀ

my chest’ ghosted autobiographies of the ex-captains Michael Clarke and Brendon McCullum have been scarpering from book outlets – both adeptly released in time for the Christmas market and carrying within their glossy dust jackets wrapped around hard covers enough intrigue and confession to generate news stories across  a multitude of media outlets. Mass media attention equals incentive to go and buy.

Here’s the thing though – while vast public profile, celebrity and swirling controversy is a compelling hook – millennials thrive on this – available audience gagging for studies of cricket’s past and its characters is very much another matter. True, many of these past players and events may well have generated  extensive coverage  in their time but for most, 30, 50 or 100 years later, the applause has well and truly faded to match the sepia images they have become.

But all is not lost. When you travel through the fascinating tributaries of Padwick you’ll soon discover that the constant regeneration of cricket readers has seldom stuttered, let alone stalled, going by the number of titles available annually. Autobiographies, biographies, histories, tours, poetry, songs, anthologies – cricket’s bibliography abounds and there are few signs of a slowing down or halt to all of this productive industry. 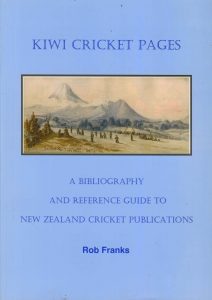 When in 2006, Rob Franks, New Zealand’s equivalent of Tim Padwick, published his  book Kiwi Cricket Pages, A Bibliography and Reference Guide to New Zealand Cricket Publications, he listed 1575 entries of which 600 were in the category of books (the rest being tour guides, programs,  magazine  titles  etc).  In the 10 years since publication Franks has discovered another 75 books published prior to 2006 but added a further 125 books in the  last 10 years – so in yearly figures in the last decade, New Zealand is averaging a dozen cricket books per year. His all up total entries, if published now, would total 2265.

What all this tells us is that there is no diminution in demand, indeed an increase, but that will not disguise the fact that there are some conspicuous pressure points. In the last 20 years, to the best of my knowledge, no Encyclopaedia Britannica salesperson has knocked on my door – this information base now almost the  sole  preserve of  Aunty Google just as Cricinfo has stepped  in as a crucial source of results and statistics. Yet, it would be a very brave oracle who could confidently predict that in 2064, Wisden won’t be rushing out its 200th anniversary edition and that in 2048, the New Zealand Cricket Almanac won’t publish its centenary anniversary edition.

No publisher is going to commit as far out as 2048 let alone 2064 (Wisden) but Mower Books, the publishers of the New Zealand Almanac tell me that not only   has the Almanac found a very satisfactory level of sales but what’s more, last year’s edition sold out. The publication of the Almanac is subsidised by New Zealand Cricket and this support will be a crucial element in its ongoing survival. Given the reassuring current demand, prospects are good.

The two beavering editors of the Almanac, Frances Payne and Ian Smith, both slavishly adhering to statistical accuracy, have carried on a tradition of New Zealand record compilers in the very substantial footprints of TW Reese, AH Carman and DO Neely. These pivotal names laid down the history of the New Zealand game – never better exemplified than in Don Neely’s seminal Men in White. Three diﬀerent volumes of Men in White (including the oversized deluxe edition) grace the cricket- lover’s library, but, and this is a very emphatic but – like the New Zealand Cricket Encyclopaedia (one volume) future editions are unlikely. They get sideswiped by the Encyclopaedia Britannica syndrome – the internet’s Cricinfo is there to fill the gap.

But hang on – stay with me on this one. The current sale of sports books (including cricket) is not only buoyant but periodically leading the way for publishers and sellers. In New Zealand, not surprisingly, rugby titles can be a book buyer’s magnet. Recent biographies of Richie McCaw ran to 120,000 sales, Dan Carter 75,000. And cricket doesn’t miss out either. Richard Hadlee, Rhythm and Swing made the 40,000 mark, Jeremy Coney’s Playing Mantis, setting new standards in autobiography, was a stellar seller while Brendon McCullum’s recent eﬀort will certainly exceed five figures.

In Australia, a glance at shop shelves in 2016 revealed a veritable open gushing pipeline of cricket titles.

So the plaintive mantra on the demise of the physical book now appears to be about as accurate as the prediction of Hillary Clinton’s path to the White House. What do we take out of these blockbusters –Clarke, McCullum et al. One – that big names equate to big sales – nothing has changed there – and two – it also points to the attraction of stories about people – the biography as an attractive avenue for cricket authors to continue to pursue.

Of course, positioned under the big names are the lesser lights, but also the untold stories of past heroes as well as the obeat stories of the game and players.

Illustration: there’s a voyeuristic BBC television program called 24 Hours in A & E replete with blood and guts and real-life drama. But the attraction of this program is the fly-on-the-wall approach to the victims and their families which not only reveals their interactions but exposes the story of their lives and their relationships. There is a touching fascination about the honesty of what the camera reveals.

Is lifting the covers on the life of a cricketer the equivalent of a reality television program? My fascination in exploring a cricketer’s life is predicated on finding out their background and the influences that led the subject to scoring hundreds or bowling out the opposition.

Over the past year I’ve been exploring and writing the life of Stewie Dempster, working title Second Only to Bradman (Dempster’s test average  65.72 is still second to the Don). My research found that when Stewie, an only child, was a youngster his father was in court for stealing; his parents at one time were in the divorce courts after his mother had a dalliance with a plumber; and later Stewie himself would marry three times; and that’s just the start. This may all sound a tad prurient but  by discovering the influences on Stewie’s progress in the game, you assemble the elements of a rounded story that goes beyond stark statistics.

There are more than a few who have an ease of writing and storytelling artistry that bring these tales to life. In this respect, it almost goes without saying that Gideon Haigh is the Antipodean leader in the field of biography and general cricket writing (if not the world). In New Zealand we can celebrate Dick Brittenden, a standalone almost, whose word-pictures of the heroics of Bert Sutcliﬀe and Bob Blair on a poignant day at Ellis Park still resonates as a classic piece of writing. There have been others like the recently deceased DJ (Don) Cameron.

Mere mortals, some of us may be, but the desire, I’m sure, among a devoted band of authors, is to keep chiselling out the cricket stories that remain untold. At my last cricket book launch the MC asked me, “Why do we write cricket books?” Reply: “To sell as many copies as possible.” Flippant and facetious as that may have sounded    it does underscore the process – a hewing away to build readable paragraphs for as wide a market as possible.

The cricket bibliophiles will no doubt continue to add these ‘labours of love’ to their shelves – but for the writer, expanding beyond the committed collectors remains the challenge.

The most underrated buyers for a cricket book may well be women. Booksellers tell me that women chose presents and gifts for fathers, brothers, husbands and sons. I’m now contemplating changing the Stewie Dempster title to Stewie Dempster – A Ladies Man (which he was!).

And there is another piece of research that is relevant – in New Zealand the substantial increase in youngster playing numbers (18.7%  increase  in  2015-16 junior playing numbers in Auckland alone), a result of the last cricket world cup, is conveniently putting in place the prospective book buyers of the future.

Legendary golf writer, but also cricket lover, Bernard Darwin once wrote of the cricket writer: “His is an eclectic task; he has so much dross to discard; he  must  hit on the true gold.” If we can find the nuggets and follow in the ways of what Darwin further expanded on – “it [cricket] has inspired some of the raciest, most picturesque and most spirited prose in the English language”, the physical cricket book can retain a cherished place in the digital age.

But the final word goes to the Pulitzer prize-winning book critic, Michael Dirda, who eloquently wrote, “Despite the rising popularity of the downloadable e-text,      I still care about physical books, gravitate to handsome editions and pretty dust jackets, and enjoy seeing rows of hardcovers on my shelves. I also think of some books as my friends and I like to have them around. They brighten my life.”