You are here: Home / He Gave Us Between Wickets
Ray Robinson was the outstanding cricket writer of his time. 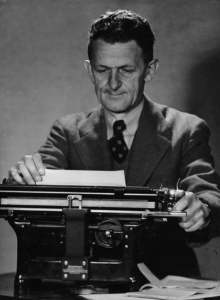 Robinson was not cast in the mould of a Cardus, a Fingleton or an Arlott. His writing style was somewhat reminiscent of RC Robertson-Glasgow, for whom Robinson had the highest regard. Bill O’Reilly said of his friend, “Of all the cricket writers I have read and tried to read, Ray Robinson was the unrivalled leader of the band.” Alan Davidson paid him this tribute: “His books were masterpieces, the research was incredible. He was not just a writer; he was a friend of cricket.”

‘Sugar Ray’ as he was affectionately known, was a quiet, somewhat reserved person and meticulous writer. Like the boxer ‘Sugar’ Ray Robinson, the best fighter in the world at the time, it was felt that he was the best cricket writer in the world, pound for pound. He ensured that every detail of an article was correct before he put away his pen or packed up his typewriter.

Raymond James Robinson was born on 8 July 1905, the eldest of three sons who were raised in the Melbourne suburb of Brighton. Ray had an interest in all sports. He played cricket, Australian Rules football, golf and squash. When his schooling was concluded he secured and served a cadetship with the Melbourne Sun-Herald group.

Originally, Robinson had thought that his talents lay as a cartoonist; however this was not to be. He worked in different facets of journalism from a street reporter to sub-editor before finding his niche during the Bodyline series in 1932-33 as a sub-editor.

In discussing his early journalistic days, Robinson mentioned that he believed he was responsible for coining the word ‘bodyline’ when he referred to it in an article that had landed on his desk at the Herald. In rewriting the article he conveyed the thought that Larwood “bowled along the bodyline”. Subsequently the word ‘bodyline’ became part of cricket lore and more importantly, associated with the MCC tour of Australia under the captaincy of Douglas Jardine in 1932-33. Larwood became a close friend after he migrated to Australia and was a regular luncheon partner of Robinson.

Ray married in 1927 and from that marriage two children were born, Brian in 1930 and Audrey in 1934. Following his reporting and editorial work during the Bodyline series an invitation was extended to Robinson to join the Star newspaper. When the Australians toured England in 1934, Robinson worked for a London press bureau, occasionally visiting grounds to relay first-hand the Australian team’s deeds. It was the commencement of a long association with Australian cricket.

During World War II Robinson worked as a sub-editor for the Daily Telegraph in Sydney. It was during this time that he conceived Between Wickets. He sent the manuscript to Neville Cardus, with whom he had developed a friendship in Sydney. Cardus was so impressed with the manuscript that after reading it, he sent it on to William Collins in Glasgow.

Between Wickets was published in 1946. When Robinson arrived in England in 1948 with Don Bradman’s team, his name was well known, not only because of his contributions to The Cricketer magazine but also due to the success of his first book. Two further books followed: From the Boundary (1951) and The Glad Season (1955), titled Green Sprigs in Australia.

He toured to England in 1953, 1956 and 1961, the West Indies in 1954-55 and South Africa in 1957-58. En route to England in 1956, Robinson visited India. As the years progressed Robinson built up relationships with overseas newspapers including the Daily Telegraph in the United Kingdom, Times of India and sports magazines such as Sports Week.

In 1966 he developed eye problems and was operated on at the Boston Retina Clinic in the United States. It was hoped that his declining eyesight would be restored. He was supported in his surgery by fellow journalists and the NSW Cricket Association, who provided a small loan to assist him to pay for the operation. Following the operation it was found that he had a stomach complaint and in excess of 15 pints of blood were required to help him overcome his condition.

He returned to Australia having completed a book called The Wit of RG Menzies, a departure in style from his previous books. In 1970 he retired from full-time journalism. In what was a difficult time physically he produced two magnificent books, The Wildest Tests (1972) and the classic work on Australian captains, On Top Down Under (1975) which won The Cricket Society Literary Award in 1977. He continued updating his masterpiece right up until his death. Robinson was always reviewing, checking and adding to the manuscript. It became an obsession.

Ray’s wife Jess died in 1973. Despite failing health himself, he continued to be involved in writing, attending first-class cricket matches at the Sydney Cricket Ground, journeying to Melbourne occasionally for Test matches and also attended meetings of the Australian Cricket Society in Sydney, where he was a foundation member, and Melbourne. He would often be seen sitting in the back row during delegate meetings of the NSW Cricket Association.

Robinson died two days before his 77th birthday. It had been a rich life. He once said: “You know, Between Wickets was good to me. It enabled me to buy our house at Northbridge.” I am pleased that Robinson wrote Between Wickets. It is a legacy that he graciously left for the world of cricket literature and his writings serve as a model for all cricket writers.