There were 14 years between us. In the 1930s, our loving parents Lou and Rene had other things on their minds, in particular negotiating the aftermath of the Great Depression, and confronting the prospect of World War II. Not much fun there. But how lucky I was, because that age gap offered me the good fortune of a second father figure, and a goldmine of wisdom. From beyond the family there was the occasional ‘how’s your father’ moment. When Rich, by then ill, was inducted into the Sydney Cricket Ground Media Hall of Honour, Daphne generously offered me a seat at her table. To my right, a concerned fellow guest enquired about Rich’s health, asking: “How’s Dad?” Before I could respond, his head inclined in the direction of Daphne, and: “How’s Mum coping?” On the phone to Rich that night there were gales of laughter.

Rich was a great mentor to many, and to me … saved me from myself more than a few times. When fielding the odd JB light-bulb moment he would fix me with steady blue eyes, then offer the querulous raised left eyebrow, and, after a pause, advise: “Never take yourself too seriously.”

A few words for Rich: determined, meticulous and spontaneous. We can add generous, agricultural and inspirational. Would you believe ‘preacher’? ‘Incomprehensible’ is another.

When I was five and he 19 he used to walk me up to the little red phone box at the top of Sutherland Road, where, in the backyard at No 5 he had developed his great love for cricket. He used to park me outside the box, on a low brick fence, to play a word game while he phoned a friend, or three. Over time, phonically speaking, I perfected a ‘big word’ … in—com—pre—hens—ible.

I never did ask Rich why he chose that particular word to advance my vocabulary. But, judging by some of the events on, and off, sporting fields these days I think it fair to say that even in 1949 he had developed the instinct for which he became famous –being ahead of the game.

Determined. If you ever engaged Rich on a ticklish topic you needed to closely monitor his bottom lip. The very readable Ray Robinson, who paid homage to Australia’s Test cricket captains in On Top Down Under, nailed it: “If events demanded firm correction, Richie’s lower lip jutted farther out like a tramcar’s step. You could measure how well correctives were working by the way it retracted until a dragonfly could no longer have alighted on it.”

Meticulous. His attention to detail, legendary, was possibly a by-product of a cricket captaincy must-do, get the field right. Rich was the No 1 ticketholder at his Sydney Grade club Cumberland, now Parramatta, and, with Doug Walters, the No 2 ticketholder, was ever happy to entertain full houses at the Annual Legends Lunches. When Rich had to miss the last one it disappointed a former Cumberland swing bowler named John Chadban. Over a two-beer toast to Rich in absentia John, with raucous good humour, recalled his ‘greatest moment’: “It was my first grade debut, the great Richie Benaud my captain! He placed me at square leg, but I had a wandering habit never checked during my early, less intense career path in the up-country Dungog dairy-farming community. After reminding me several times of my nomadic ways with a wave of the hand and eventually a frown, in the sixth over of the day Richie stopped the bowler mid-run, vacated first slip and strolled over to me. He gently placed his hands on my shoulders, shepherded me into the correct position, scraped a hole in the turf with his sprigs, and said, ‘There!’ I never wandered again.”

Spontaneous. In 1958-59, when Rich became captain of Australia, he was accused of bringing too much emotion to the game, backslapping and hugging, ‘lowering cricketers to the level of soccer players’. After that 4-0 series win, the Ashes regained, as a 15th birthday present Rich took me in the Holden with the green side-flash to the Sydney Sports Ground to see the NSW soccer team play one from Costa Rica. “Watch Leo Baumgartner,” he said, and, “Ron Lord, what a goalkeeper!” New South Wales won 6-1. Baumgartner scored two goals, once rattled the crossbar with a thunderous shot from way out, and my big brother was up out of his seat, arms raised, hallelujah moments, face ablaze with absolute joy.

Photographers would snap the same reaction a couple of years later when Rich bowled Peter May around his legs to plot a winning course in the Fourth Test at Old Trafford.

Agricultural. Rich knew how to plant a seed to get a positive outcome. Subliminal advertising, they call it today. Sometimes on Saturday nights he’d suggest I accompany him to a telecommunications centre in the city where he’d file copy to England, via a telex operator. I heard the pounding clickety-clack of the teleprinter machines, watched the news being printed before my eyes. I was captivated. Before you could say ‘Get your late final extra’ I had started work as a copy boy on Rich’s newspaper, The Sun. And not once had he suggested I should make my career in newspapers.

Inspirational. To play in a cricket team captained by Rich was perpetual work experience, enjoyable and never boring. Cricket fees? At Cumberland they were the entrance money to the greatest cricket show on earth. He was the master of mind games. He could manage his men and also manage the opponent. And, more often than not, he managed the outcome of the game.

Generous. When he returned from the Ashes tour in 1953 he had in his luggage trunk about 50 brand new Stuart Surridge bats to satisfy orders for the new season from fellow cricketers. A similar offer in 1961 enticed Cumberland’s opening bowler Ron Mulock, a No 11 with no batting talent to boast about, to express an interest in a new blade. Cue sniggering team-mates. Rich offered Ron a deal, which in effect was a rebuke to the doubters – a free bat for Ron if he could make 75 runs in the season. Alas, Ron made only 63, but … his 14 (including a six) on a wet pitch in the final round was so good and valuable that Rich decided they should count double. “Congratulations, Ron …”

Preacher? Of course not. Rich practised cricket more than religion but he loved to spread the cricket gospel according to Lou: love the game, respect the spirit. The scene is Parramatta Railway Station, a Friday evening in September 1962, Ted Dexter’s Englishmen soon due Down Under to try to wrest back the Ashes. Hullo, is that Richie Benaud the Australian captain boarding the Mudgee Mail? Sure is. Next day he captains Cumberland in a match against faraway Binnaway, manned by the pick of the district’s wheat farmers; plays another match the next day, then catches the train back. In 2015, take a few seconds to digest that – an Australian captain on the eve of a red-hot Ashes challenge, prepared to play a couple of social matches in the ‘outback’. 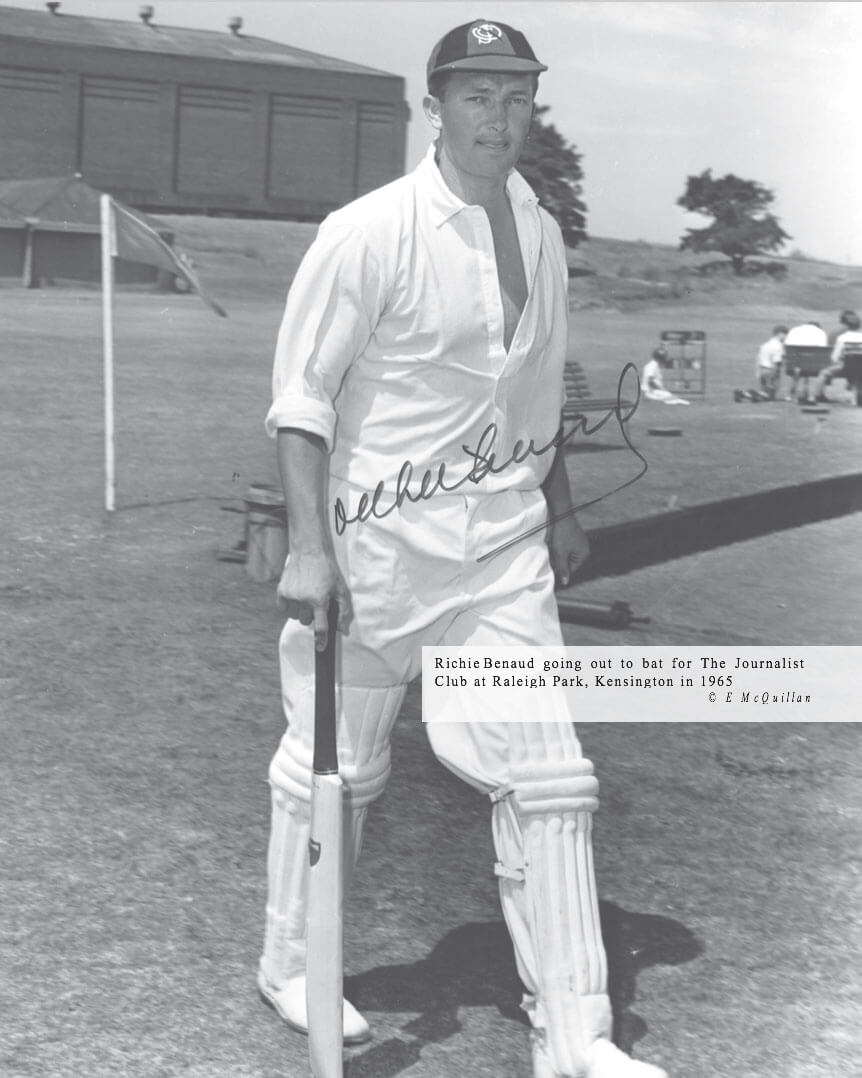 The memory of a little boy, five going on 10, carefree at Sutherland Road, is more shadowy than sharp about brother Rich. The arrival of the baker’s horse and cart and fresh bread, buttered crust to follow – now that was memorable. I knew my big brother played cricket, but so what? And, dressed in his double-breasted suit, he’d go off to work in an office in the big city I’d not yet seen. Memory flashes occur: Rich at the front door, face bruised black and blue, eyes swollen, hit by a bumper at the MCG, Rene’s gasp of concern; after a hit in the mouth against South Africa, watching him that night in our little bedroom, with swollen lips sucking on a straw from a bowl of long soup fetched by the next-door neighbour from the Green Mill Café.

Sutherland Road, North Parramatta was the family home for about 60 years and Rich was ever there, living, visiting, or in spirit. There was the celebrity chef moment. Home from England in 1953, first time out of Australia, mind expanded, he arrived at No 5 and announced to Rene he would be cooking dinner, an international dish called Hungarian Goulash. Over the washing-up there was a short review, and it was agreed Rene’s roast dinners were a better bet.

Disturbed by the smallness of Rene’s kitchen Rich insisted on cupboard renovations, drew a plan, announced his curriculum vitae as woodwork lessons at Parramatta High, appointed me as his apprentice, and set to work with a saw, hammer and nails. Work was intermittent and usually accompanied by a fine film of red cedar sawdust. After three weeks Lou called in the experts, who agreed with the design but questioned the workmanship. Benaud Brothers Kitchens wasn’t a goer.

About then, Lou took me to my first Test match and I saw my big brother playing for Australia, facing a Tyson called ‘Typhoon’ at the SCG in 1956 … planted a seed. When I played my first Test in Adelaide 16 years later Rich was a journalist reporting on play. Lou was pretty happy about that, sort of Benaud & Co.

Rich was a champion in the truest sense of the word, and a gentleman too, a combination not often seen in top-level sport these days. He will be missed by zillions.